Happy New Decade. We trust you all had a wonderful holiday season. As the we enter a new decade how many of you remember where you were December 31st, 1999? The clocks were going to fail to rollover and our world would shut down. Did not happen, just like then 2019 did not end with a thud as in 2018. Markets behaved quite well, and December closed out a very good year for investors. Please find our commentary and your report in the following pages.

Before we jump into a review of 2019, let’s touch on the events that led up to last year’s impressive rebound.

As 2018 ended, stocks were in the midst of a steep sell-off, which shaved nearly 20% off the S&P 500 index over a three-month period. At the time, the Fed was on rate-hike autopilot, i.e. gradually increasing the fed funds rate in quarter-point increments. In addition, the Fed was allowing bonds purchased during its bond buys (popularly called QE or quantitative easing) earlier in the decade to run off its balance sheet.

The rate hikes, which began in late 2015, did little to deter bullish enthusiasm. That is, until October 2018 when investors began to fret that the Fed might be on the verge of a policy mistake that could tip the U.S. economy into a recession. Mix in rising trade tensions with China and a steep and unsettling correction ensued. It rivaled the sell-off in 2011, which was tied to recession fears and a widening euro zone debt crisis. A loss of just seven more points on the S&P 500 Index would have officially ended the bull market, which began in 2009.

Let’s take a step back for a moment.

Sometimes, investors overreact. It’s happened before, and it will happen again. There is an emotional component that can dictate actions among short-term traders. There are also computer-based trading programs that can influence sentiment and exacerbate market moves.

Sometimes, excess euphoria breeds too much enthusiasm and stocks become overvalued, at least temporarily. We saw that in early 2018.

As 2018 came to close, the opposite occurred. Pessimism ruled the Street, and stocks were undervalued. Economic growth was poised to moderate, but not stall. Profit growth slowed to a crawl last year, but an earnings recession did not ensue.

As we look back at 2019, trade headlines and Fed policy had the biggest influences on sentiment. Throughout the year, market action marched to the beat of trade announcements. Positive trade headlines generated enthusiasm and tensions created pullbacks.

Zoom in on May and August, and rising tensions forced the bulls to the sidelines. Still, the broad-based S&P 500 Index lost less than 7% during each of the pullbacks (St. Louis Federal Reserve S&P 500 data). Such declines are modest by historical standards. The Fed quickly altered its stance in January, going on hold as it abandoned its desire to keep bumping up the fed funds rate. The Fed completed its pivot in the middle of the year. Instead of two projected rate hikes in 2019 (per FOMC projections made in December 2018), the Fed eased and cut rates three times.

Additionally, the Fed stopped shrinking its balance sheet. By year end, the Fed was back in the open market purchasing shorter term bonds and T-bills, at least temporarily. While it refuses to use the term “QE,” in effect, it’s employing a similar policy to what it used earlier in the last decade after the Great Financial Crisis. In December, Fed Chief Jerome Powell hinted that he is in no hurry to take back any of the rate cuts in 2020.

Moreover, recession fears earlier in the year have subsided, and the U.S. and China are expected to sign a limited, phase-one trade deal this month. It’s not the all-encompassing agreement that investors had hoped would be inked earlier last year, but it reduces near-term trade tensions.

New negotiations, which could eventually lead to a more comprehensive phase-two agreement, will resume, though the outlook for additional progress is murky.

Bottom line—stocks finished the calendar year in an impressive fashion as the new year began right after the December 2018 selloff. We must remember the first +14% of gains in the S&P 500 were just climbing back to even then reaching new highs later in the year.

The ever-present question on investors’ minds is “might a recession be lurking in the near term.” To that end, global growth slowed last year, and activity in the U.S. manufacturing sector has been soft. A recession is inevitable, but is 2020 the year?

Economists haven’t done a very good job of forecasting recessions, but conditions that generally lead to a recession aren’t in place today. These include:

2. A credit squeeze that cuts off lending to businesses and consumers.

3. Asset bubbles. Stocks aren’t cheap, which make them vulnerable to unexpected events, but valuations (P/E ratios) are nowhere near levels seen in 2000.

In addition, the long-running expansion has been sub par. That means we haven’t seen the excesses and imbalances that breed euphoria and excess spending.

In the US, The Conference Board’s Leading Index isn’t suggesting a near-term acceleration in growth, but the broader-based service sector is still expanding, and consumer spending has been good but slowing for the last 7 months.

The economic data is showing a number of metrics that continue to decline. US manufacturing continues to contract, and US corporations are seeing their profit margins erode as rising wages eat into them. At first, they reduce costs where they can but if it continues, eventually layoffs will begin and jobless claims will begin to rise.

China, the world’s second largest economy, is still slowing. They have been constrained from stimulating their economy by rampant consumer inflation and declining national reserves. Their manufacturing has declined to a -1.6% YoY rate and credit growth is at a 12-year low. Further, stock market action isn’t foreshadowing a near-term recession. If the nominal growth rate of China’s secondary industries remains mired in the secular downtrend they’ve been in for 3 years now, the global economy may find it difficult to climb higher.

We view a well-diversified portfolio as the economic equivalent of purchasing a stake in the Global economy. We don’t know if the economy will be larger in 2020, but over a long period, the U.S. economy has expanded along with global partners. We see it reflected in long-term stock market performance. 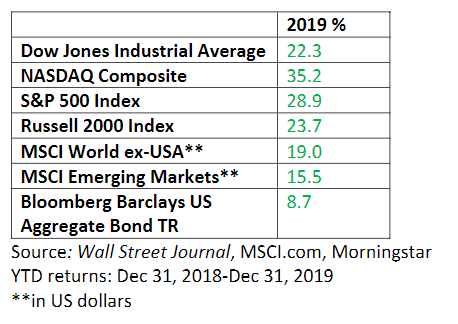 Based on what we have discussed so far, we believe that 2020 should offer investors another year of global expansion albeit at a subdued rate but still in the 7-10% equity return range. But like Odysseus crossing the strait of Messina (so fun to revisit this stuff in classes with William Fredlund at the Institute) investors will face several substantial risks. In Homer’s Odyssey, Odysseus had to face both a sea monster (Scylla) and a giant whirlpool (Charybdis). For Investors, one potential peril is a pickup in US wage or price inflation that would indicate the Fed has made a serious mistake in cutting real rates to zero. A second potential peril might be a progressive overhaul of the US economy after the election. Bans on stock buybacks, increased corporate tax rates, sector level collective bargaining, etc. A third potential peril is if the trade war should reignite.

During the coming months, and certainly throughout investor lives, there will be times when the outlook sours. But as we’ve seen time and time again, the U.S. economy has recovered and gone on to new highs.We know that stocks can be unpredictable over a shorter period. While they are sometimes unpleasant, sell-offs are normal. We take precautions to minimize volatility and, more importantly, keep you on track toward your financial goals.

As we move into a new decade, I’m reminded of a remark by legendary investor Warren Buffett: “For 240 years it’s been a terrible mistake to bet against America, and now is no time to start. America’s golden goose of commerce and innovation will continue to lay more and larger eggs.”

We hope you’ve found this review to be helpful and educational.

Based on your feedback, we will align our 2020 giving campaign with “double matching” opportunities that some charities have in November. Double matching goes a long way to maximize the impact of our charitable dollars.

This year many of you contributed highly appreciated assets to Donor Advised Funds (DAF), and we expect many more of you to consider this option in the future. Others took advantage of Qualified Charitable Distributions (QCD) from retirement accounts which allows a tax-free distribution to qualified charities. We think the QCD is one of the smartest tax moves (assuming you are already taking an RMD), creating a true win-win situation. Please reach out to us for more information on any of these and other techniques.

Chris and Laura spent a week with family in Hawaii for Christmas. It rained EVERY DAY, at times it seemed to be coming down by the bucket (and not the drop). We still managed to have a great time exploring beaches, seeing sea turtles, snorkeling, and generally having a good time.

Scott Ponder and Erin Kincheloe Over the Holidays we enjoyed spending lots of time with family and friends as everyone came in from all over this year. We had a great time cooking and enjoying lots of great food.

Around Thanksgiving, we had the privilege of going to watch our 16 year old niece, Ali, compete in the CA State Cross Country Championships. This was her first year to run Cross Country and she was very surprised to make it to the State finals. There were 221 girls in her division where she finished in the top 20%. We were very proud of her and glad she was doing the running part and we were supporting.

Scott and Denise Yang note that Tyler finished his first semester as college student at San Jose State University. Katelyn finished varsity field hockey and is now playing varsity basketball at her high school. We took the kids to Seattle for a few days to enjoy the surroundings, including Pike’s Market, the Space Needle, and the Museum of Pop Culture.

Monique and her family have a new puppy edition to the family, Gazpacho aka “Pacho,” a boxer terrier mix full of energy. Our 7-year-old pocket bully, Kay Bonita, has stepped up to the plate and has been a wonderful role model. After eight weeks with us, Pacho has learned to sit on command, catch treats and shake. Christmas was relaxing at our house, even with Pacho taking down the tree a few times. The family is looking forward to 2020 with graduations around the corner!

Danielle and her family had a quiet Thanksgiving and Christmas with good food, friends, and way too many toys.

Jared just finished up his 5th semester at San Jose State University and is getting ahead of the game by taking a winter class. He has been keeping busy with work, school, and traveling around California going places like Los Angeles, San Diego, and San Francisco. I got to travel home for the holidays and have some quality family time as well as seeing old friends which was very enjoyable. I look forward to the spring semester and all of the opportunities to come in 2020.

Kelsey I am excited to be part of the Silicon Valley Wealth Advisors team and look forward to meeting everyone! I am excited to learn more about financial services as well as start to chip away at my student loans.

We are humbled by the responsibility you have given us and appreciate the opportunity to serve as your advisory team.