Happy New Year! We wish you a very Happy and Prosperous New Year! It is the start of a new year, and we can finally say goodbye to 2020 as we embrace a hopeful 2021. For many, it is also a time to plan, set new goals, and schedule things to look forward to for the coming year.

The fourth quarter was the best end to a year since World War ll. Historically, when there is a +10% gain during the final two months of the year, the S&P 500 is up the next year. Although there is no certainty what the new year will bring, this sign points to a better year ahead. The announcement of a viable vaccine gave the world some much-needed positive news. Investors started looking forward to the economy reopening and life getting closer to normal. People could see the light at the end of the tunnel. Investor sentiment rose to push stocks up to new highs, and earnings expectations are for record growth.

We enter 2021 with a positive outlook for global stocks. Continued central bank accommodation and fiscal spending by most governments are supporting the global economic recovery. Stocks generally benefit when most central banks around the world are easing monetary policy.

The U.S. dollar continues its downward trend and has dropped around 12% against a trade-weighted basket of currencies from its high this year. Dollar declines usually happen during a global economic recovery because of higher government fiscal spending. As the dollar declines, the price of imported goods and services rises, causing moderate inflation. Interest rates respond next and begin to move higher as they are doing now. The Fed has stated it will let inflation rise to more than 2% for a while to keep the recovery going strong. We believe stocks should do well in at least the first half of the year, although there could be an increased risk in the second half as the early stimulus effects begin to wear off.

We like to keep an eye on the direction of growth and inflation in gauging the current environment. We have already discussed the U.S. dollar decline causing inflation to rise. Earnings growth is accelerating, so the recent stock market advance is now broadening beyond the mega-cap stocks that did well during the lockdowns. Ned Davis Research forecasts a 5.8% global GDP growth for 2021 but thinks Europe will be disadvantaged until widespread vaccine deployment exists. Germany has vaccinated about 240,000 people, while France had done just 516 vaccinations by January 1. Where on January 2, the New York Times said that the vaccine had been given to 4.2 million U.S. citizens so far.

The declining dollar is not necessarily bad news, as it helps the foreign assets in your portfolio provide more substantial returns. International equities are trading at a much lower valuation than the U.S. after the rise last year. Low valuation, coupled with the falling dollar and the rebound in global trade, make developed foreign markets and emerging markets attractive. 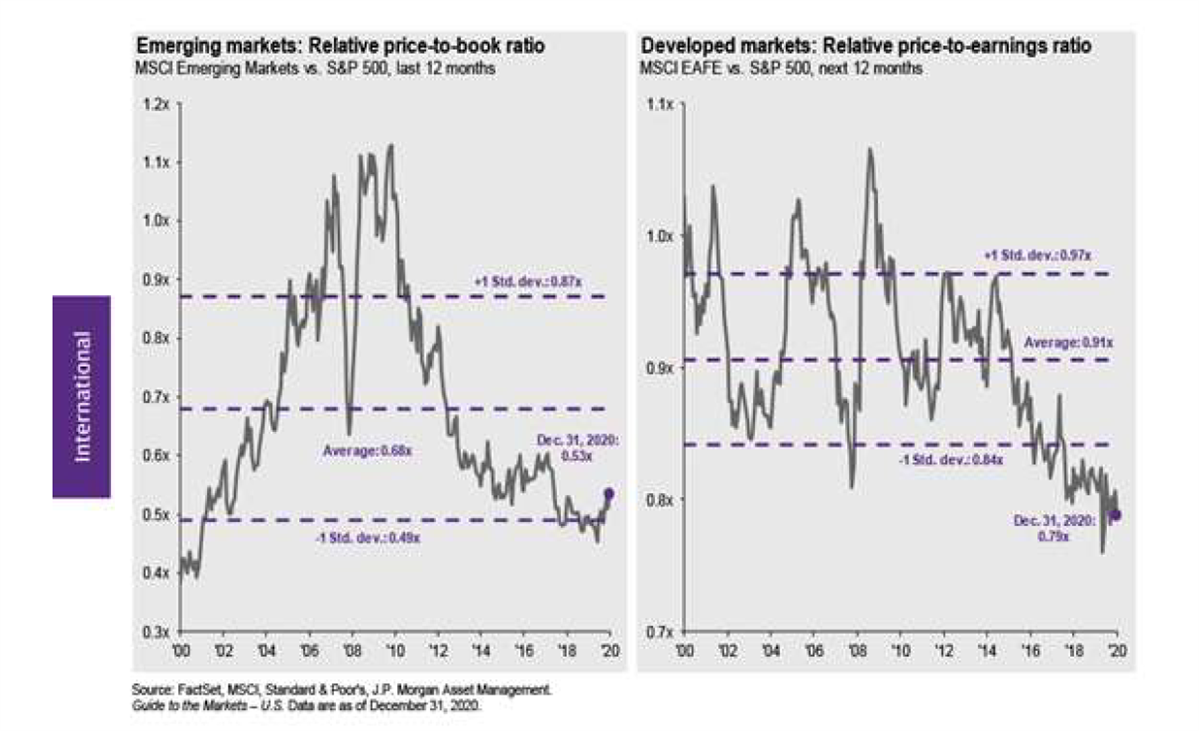 We believe that a cyclical recovery, monetary and fiscal policy, and the acceleration of earnings will underpin stock prices. We expect stocks to rise along with bond yields for now. If investors see rising yields as a positive economic sign, stocks should do well, and if yields rise too fast, investors may see it as a bad sign, which could be a different story. Another positive for stocks is a continuing decline in market volatility.

The election has given majority control of the U.S. House of Representatives and the U.S. Senate to the new administration but with just a razor-thin majority in the Senate, which still could give us a goldilocks government. The markets like "not-too-hot-and-not-too-cold". It creates a government that can probably get good things done, such as another stimulus program and possibly some infrastructure spending. It will probably take some negotiation to pass more controversial things like huge tax increases, "new green deal " legislation, and other progressive bills. That is one of the reasons markets continued to do well in 2021 after the Georgia elections. Additionally, we believe there is a high probably that there will more support and stimulus, which is positive for the economy.

Over the past year, the clean energy theme built up so much momentum analysts wonder if it indicates a momentous shift away from fossil fuels and toward renewable energy. If that happens, this momentum could continue for decades if it gets backing from both the governments and private industry. The E.U., Japan, and China have all committed to being carbon neutral by 2060 or sooner. Wind and solar energy have been the main drivers of the clean energy theme, but electric vehicles (E.V.s) and Battery / Energy storage are also part of this Green Wave. These technologies will require a lot of copper and other materials to produce the batteries and build the infrastructure that is going to be needed to charge and run these new vehicles.

At the beginning of the pandemic, the Fed lowered rates to near zero, which revived the housing demand. A few months later, prospective buyer traffic reached the highest level in 35 years. A key question is whether the housing market can sustain such a red-hot pace. Mortgage rates hit a new low last week, with 30-year rates at 2.62%. If you have not refinanced recently, you may want to look into it.

We expect earnings to be strong in the first half of the year and continued outperformance of stocks over bonds in 2021. Foreign and Emerging Markets stocks should do well with the dollar downtrend and strong growth in Asia.

Fixed income will be more challenging this year. After enjoying 30 years of falling interest rates that gave bonds a tailwind, it appears the wind is changing. As inflation continues to increase and interest rates follow, bonds will now have a headwind while inflation rises. In addition, current interest rate levels do not produce the same income as they did in the past. We prefer inflation-protected treasuries and short-term bonds to mitigate interest rate risk until rates settle into a new range. We think rates will only go up around 1% or so on the 10-year Treasury bond to about 2% in 2021.

Areas of the stock market we like in this environment remain technology and growth stocks. Mid and small-cap companies should do well because they do not export much, so they are not negatively affected by the falling dollar. As we discussed, we find foreign developed markets and emerging market stocks attractive as they are cheaper than U.S. stocks and benefit from the falling dollar. We like clean energy stocks because of these technologies' potential to be widely expanded. We still like gold as a long-term hedge against dollar devaluation, although it has recently been going through a correction after two very good years.

We will continue to monitor the global economy and adjust your portfolio according to your investment strategy. If you have any questions, we would be happy to discuss them with you and share our thoughts. Thank you for your trust and confidence.

Custodians are currently working to prepare your 1099 tax forms for your taxable accounts. Occasionally, tax information from investment companies to the custodians is late, causing the 1099s to be available later than planned.

In general, Charles Schwab, TD Ameritrade, and Fidelity expect to have your 1099s available to you by mid-February. If you receive them by mail, they will be sent and may take a little longer. If you have online access, you can start checking your account online as that will be the fastest way to obtain your 1099.

Tracy and Roberta – Roberta and Tracy have been busy with the garden, hiking whenever possible. Managed to get in a couple of rounds of golf, Tracy was very pleased to have a couple of days on the racetrack, all with Covid protocols firmly in place. We are all hopeful for a better 2021!

Chris and Laura – Chris hosted his niece and nephews for Thanksgiving. We enjoyed many games of ping pong, tried to outsmart each other in the iPhone app “Among Us”, and made many new memories.

Scott and Erin- have been enjoying the football season and look forward to the playoffs. We made it up to Tahoe for a long weekend and enjoyed some snow while we were not in lockdown mode. Cooking and trying new recipes continues to be fun.

Scott Yang - spent quality time with family, making many dinners at home and using the BBQ outside, played card games including Monopoly and Hearts. He also took some bike rides on the Los Gatos trail.

Mo and Family - I am recovering well and walking as smoothly as possible, awaiting my next surgery to remove some pins that have held me in place. I am doing well enough to resume my Farmer's Market trips and cooking, which I find very exciting. My crowning achievement this quarter is spinach pasta from scratch with sauteed mushrooms and onions mixed in a homemade alfredo sauce. Everything but the flour from my local Farmer's market makes my heart happy.

Kelsey- Kelsey moved during the holidays and has been staying safe and sheltering in place. Still enjoying her hobbies and making sure to exercise.