We know spring is in full swing when the days grow longer and warmer. We also recognize that this is tax season, as the calls from CPAs, tax professionals, and clients come in at a fast clip.

Last year, due to the market's reaction to the COVID-19 pandemic, we performed larger re-allocations to your portfolio than in average years. In most cases, we were taking profits which means you made money but caused higher taxable capital gains than usual. We wanted to let you know we do not anticipate significant capital gains again this year, and with the prospect of higher taxes on the horizon, those long-term gains from last year will take advantage of the current low capital gains tax rates.

We have a mixed bag of economic cycles. There are some signs that we are late in the business cycle, like investor speculation, traditional stock valuations at high levels, and interest rates rising. But at the same time, we have an economy that is slowly coming out of recession and still depressed. Many industries like travel, restaurants, and airlines were devastated and are just beginning to come back. That is certainly not late in the cycle.

In time, 2020 will hopefully be remembered for ushering in a new era of scientific achievement. The vaccine is being deployed faster than we thought possible, and the third quarter's hopes of reopening are growing stronger. At this writing, vaccinations are moving along at the rate of four million per day in the U.S., a number not even considered possible a few months ago.

Interest rates have been rising in recent months because of rising inflation expectations from the massive amounts of stimulus money issued by the U.S. government. Rates react and adjust to keep up with inflation. We expect the U.S. 10-year rate to reach near 2.0% sometime this year as it has already reached 1.7%.

One victim of higher interest rates last quarter was the Technology sector. Some growth forecasts are calculated using current interest rates, and lower rates mean higher growth forecasts. Rates have risen to a level that affects that calculation and caused a pullback in technology shares in the last half of the quarter. It is a little too early to tell if this is a new trend or just some profit-taking while rates are rising.

This upcoming quarter should give us substantial earnings growth announcements by corporations for the First Quarter. This news should be enough to keep the stock markets positive for the next 2-3 months. The Fed says they will hold interest rates near zero and let inflation run hot for the next year, which is another positive. We expect the next quarter to show a slowdown in earnings growth from the first quarter, most likely bringing some choppiness in the second half of the year.

The U.S. Government passed the 1.9 trillion-dollar stimulus measure, which will help many out of work and help out the states. The U.S. unemployment rate fell to 6.0% last week, which is excellent news, but there are still 18 million people on the Government continuing unemployment claims report, and that will take some time to work off.

The current scenario is that with the vaccine in place, the world economy will normalize, and we will have a bounce-back in the economy of up to 5-6% growth this year. The U.S. is in the best shape with vaccinations which will allow reopening. Europe has had a bad start on vaccine distribution but should catch up with a few months lag and join the global recovery. There are things to watch, like unprecedented budget deficits in the West. If we include the new $2.2 Trillion infrastructure program in the planning stage, we will have spent about two times the amount Japan and other major countries have as a percentage of GDP. Historically, high debt amounts slow down economic growth over time. You can see the rapid growth of the Federal Reserve's balance sheet in the chart below: 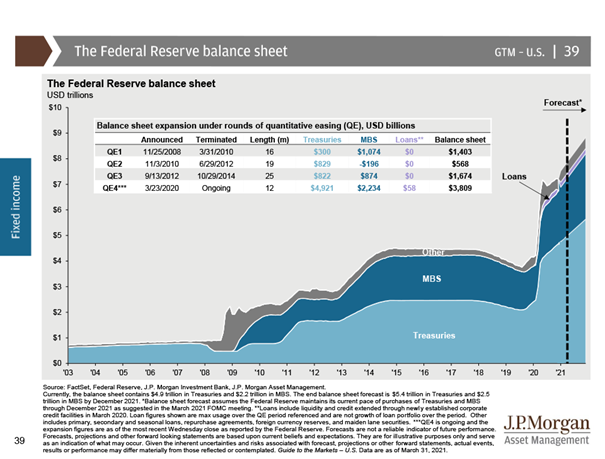 We think we may have seen the bottom in inflation, which means the bottom in bond yields may be in as well. Central banks globally are saying they will let inflation run higher than usual because they think it is transitory. Let us hope they are correct. Others believe the massive stimulus from most major countries will cause inflation. We will have some prices rising initially from the reopening with supply chain disruptions and shortages of materials and products. Dry bulk ships are low in numbers, so shipping costs are up. The U.S. trucking industry had a slew of bankruptcies that took much of the capacity offline. These higher costs will remain with us probably into 2023. How long that lasts, we will see. The declining U.S. $ will also be a source of some inflation on the roughly $3.0 Trillion of goods we import. Over the last six months, the CPI inflation index is at a 2.8% annual rate, and we expect it to continue to rise over the next few months.

On its own, the economy would probably lean towards deflation or at least disinflation with increasing technological influences. Governments do not know how to deal with deflation, so they always want to have inflation positive for several reasons. Over the last ten years, central banks have tried to create growth by pushing money into the system, creating more and more money, and cutting interest rates near zero, but it has not worked. We seem to be shifting from a free-market economy to more of a planned economy—one with more and more debt put on the system each time growth slows. The central bankers seem to fear letting the system cleanse itself as it used to, so they come to the rescue each time with more money. It appears they will maintain the continuous flow of more liquidity, so equities should still do well. As the Government continues to create money, it will result in the currency's devaluation over time. The Government will become a larger and larger slice of the economic pie, leading to higher taxes.

Most U.S. government bonds are not keeping up with inflation currently. As long as the Fed holds down short-term rates near zero, we have to look elsewhere to earn more than inflation.

Senior corporate loans are one place we found that offers yields higher than inflation, along with some corporate bonds, mortgage bonds, and select municipals, so we are focusing on these areas.

We still want to have a diversified fixed income allocation while understanding that bonds will not be able to generate the returns they have in the past. We are maintaining exposure to a diversified basket of U.S. equities with some foreign and emerging market stocks for the equity allocation. In the future, we still expect the dollar to continue its decline over the next few years for the reasons stated above. That should provide us with good opportunities in foreign and emerging markets, especially in Asia, which is forecast to have strong growth in the next few years. We are expecting the U.S. markets to be positive on earnings news into early summer.

We will continue to monitor the global economy and adjust your portfolio according to your investment strategy. If you have any questions, we would be happy to discuss them with you and share our thoughts. Thank you for your trust and confidence.

Tracy and Roberta – have been trying to make friends with Joe Pilates. Bought a reformer hired an instructor as were are in the pursuit of better fitness and health. Wish us luck!

Chris and Laura- spent another quarter hunkered down at home, eagerly awaiting widespread vaccination and eventual return to normalcy.

Scott and Erin- have been enjoying the early spring working in the garden.  Erin found out how easy it is to get carried away purchasing flower bulbs online. We have received 46 Dahlia bulbs so far, and UPS delivered another box of 6 today. Now we are thinking everyone in our neighborhood needs at least one Dahlia this year.

Scott Yang - and his family are still hunkering down at the home. Daughter Katelyn is going to graduate high school this year and is in the process of choosing a college.

Mo and Family – are enjoying the farmers' markets and starting our own tiny garden. Currently, we are caring for our mushrooms. We wish to expand the garden to include herbs such as basil and mint.

Kelsey- has successfully settled in from her move and is working on staying safe while she awaits her turn to be vaccinated.

Lisa Ozaki – Lisa started her garden on her patio along with a worm compost bin. She is starting small by planting cilantro and basil. So far, her favorite meal was pesto pasta using her fresh basil.

In 2021, we are hosting a series of virtual 'lunch and learn' webinars predominantly focused on ESG/SRI investing. Be sure to keep an eye out for our email in May for the next 'lunch and learn.' Instead of a gift certificate, we raised money for charity as our' lunch and learn' participants donated their 'lunch.'

ESG stands for "Environmental, Social, and Governance," which describes a process of screening "in" for positive corporate characteristics. For example, it may screen for companies with a good environmental record, have good social policies, or have above-average governance policies.

SRI stands for "Socially Responsible Investing," which describes screening "out" undesirable corporate characteristics. Examples might be to filter out "sin" stocks or to exclude companies that are heavy greenhouse gas emitters.