Our Thoughts on the Russia/Ukraine Crisis

As you are undoubtedly aware, overnight, Russia launched an invasion of Ukraine. While the situation is rapidly evolving, Russia's apparent goal has gone from occupying a couple of relatively small eastern provinces to one of total occupation. Troops appear headed directly for Kyiv, and there are reports of fighting and bombing near the capital city. The markets reacted violently overnight and continued throughout the day.

Our hearts go out to the many Ukrainian people whose lives and property are at risk today. This is a tragic development that leaves us all saddened. While financial matters are probably the furthest thing from many people's thoughts today, we feel compelled to address the market situation for those worried about the implications.

We don't pretend to have any great insights into how the situation on the ground will evolve in the coming days and weeks. Still, we do think there are some timeless concepts concerning investment strategy during times of crisis that are worth reiterating.

The following table illustrates this point. It shows some of the major conflicts from WWII forward and the subsequent market reaction:

The tragic circumstances in Ukraine are going to dominate headlines for some time. Congress now sees bipartisan support for passing the most crippling sanctions against Russia, which is something of a silver lining considering the heavily partisan combat we've seen for years on Capitol Hill. In fact, it's the first full-throated denouncement of Putin from U.S. elected officials we've seen since 2014 when Russia invaded Crimea.

Until now, this year has been dominated by rising inflation, the Fed's pivot on rates, and upbeat corporate earnings. Last year, the stars aligned for strong returns, as there were few headwinds to distract investors. Today, the Fed has changed its tune, and talk of up to seven rate hikes this year has put investors on edge.

Investors are now grappling with the crisis between Russia and Ukraine. Heightened uncertainty always adds to volatility, as it increases the possibility of unwanted outcomes. We've seen that in recent days, as short-term traders trade on headlines. How might an invasion affect U.S. economic activity? This is important, as it will have a longer-term effect on stocks.

According to the U.S. Census, U.S. exports of goods to Russia last year totaled $6.4 billion. That's a tiny percentage of U.S. GDP. The indirect impact is more of a concern, as the EU is the largest Russian trading partner. Russia is Europe's fifth-largest trading partner and accounts for 40% of Europe's natural gas imports. Russia is the number one supplier of natural gas to Europe. Using gas as a weapon would be far more problematic for Europe. Sanctions and rising energy prices will likely add to inflation, complicating the Fed's job, especially if we see a U.S. economic slowdown, but consumer psychology here in the U.S.is less likely to be affected by an invasion. Without a U.S. slowdown, the impact on U.S. earnings should be limited.

There are plenty of unknowns. Historically, geopolitical events have only created short-term market volatility, as investors re-price risk. It doesn't seem likely that an invasion will disrupt U.S. economic activity and corporate earnings, but stocks could be affected in the medium term. When Russia invaded Crimea in 2014, the market declined around 6% for a short time but ended the year positively.

Geopolitics aside, investors are carefully eyeing the Fed's next move. When it comes to a rate hike or hikes, it's "how much?" not "if….". The March 16 meeting will most likely be the start of the rate hikes. As of December, the Fed's own projections put their inflation gauge, the PCE Price Index, at 2.6% in 2022, which is lower than many other forecasts.

The question—how aggressive will the Fed be?

Let's look at history. The last truly aggressive rate-hike cycle was in 1994. Then Chairman Alan Greenspan and the Fed engineered a mid-cycle economic slowdown. It was a preemptive strike against inflation, as CPI was relatively low, and the economy was far from full employment. It included three 50bp rate hikes and one 75bp rate hike. The fed funds rate rose from 3% to 6%, doubling in one year, see Figure 1. Stocks finished the year nearly unchanged, with a maximum peak-to-trough drawdown of 9%. 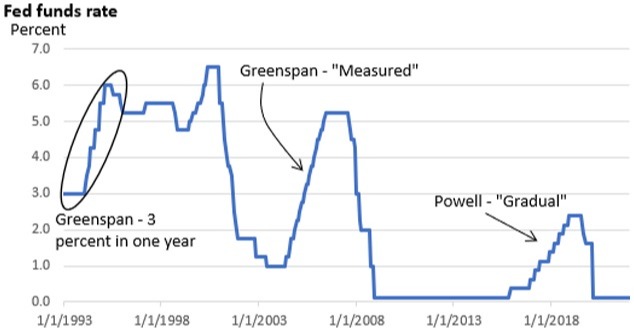 In June 2004, the Fed embarked on 17 consecutive 25bp rate hikes. So as not to unnerve investors, Greenspan's Fed telegraphed that rate hikes would likely be "measured." Rate hikes during the last decade were even more dovish. Powell used the term "gradual" to guide markets. As with prior cycles, inflation was low, and the economy was not at full employment. As with prior cycles, rate hikes were preemptive against inflation.

It's a different world today

The CPI is at 7.5%, the jobless rate is 4.0%, the Fed funds rate is 0%-25%, and Q.E. continues, though it will end in March. Powell's end-of-January press conference was decidedly hawkish. The emphasis in January was on inflation, not employment. Fed Comments included: "I think there's quite a bit of room to raise interest rates without threatening the labor market.", "This is, by so many measures, a historically tight labor market—record levels of job openings and quits", Wages are moving up at the highest pace they have in decades."

Powell did not provide any rate-hike guidance—no use of "measured" or "gradual." And he didn't rule out a 50bp increase at a meeting. The last time the Fed hiked by 50bp was in 2000.

Risks include the following:

• How does the Fed rein in inflation and not create a recession?

• Can the Fed engineer a soft economic landing that brings inflation back to target?

• The Fed needs help from the supply chain and a shift in demand toward services and away from goods. But rising wages could complicate the picture, as job openings remain near a record.

The CPI rose from 7.0% in December to 7.5% in January. The core CPI, which excludes food and energy, rose from 5.5% to 6.0%. Goods less food/energy are up nearly 12%—see Figure 4. The rate of change in services, which had been more muted, has now accelerated, up 4.6% in January, and the 1% rise in the Producer Price Index suggests inflation is still running hot.

Figure 4: Pain at the Cash Register 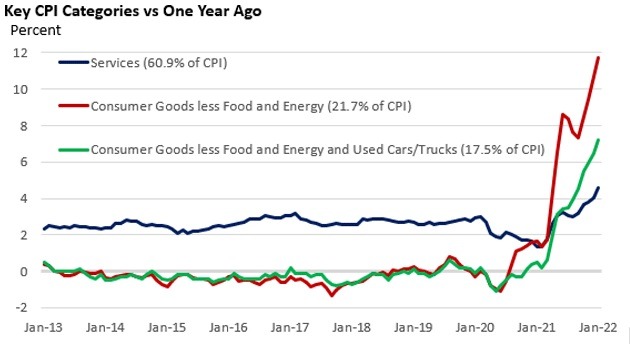 3. It's not all gloomy—earnings are strong

Earnings reports have been strong for Q4 2021 for S&P 500 companies. Profits for the last quarter are projected to rise 31.0% versus one year ago (Refinitiv, with 72% of companies having reported through February 11). While we have seen some high-profile misses and there has been no shortage of talk about higher prices and higher costs—75% of companies have cited inflation on earnings calls per FactSet.

Looking to the March meeting, if the dots line up with fed funds futures, that would be a 1.75%-2.00% fed funds rate at year-end, or seven 25bp rate hikes this year (if the Fed were to hike in 25bp increments). Are investors prepared for such an outcome? It's difficult to believe that they will be able to raise rates that much that quickly after over ten years of holding rates near zero. Some say that rates in that range are still accommodative, although it is a huge jump from where they have been. The Fed could adjust its inflation forecast as new data comes in, especially if inflation starts to moderate, but they are playing catch-up after 20 months of rising inflation since they were so late in reacting.   They have a careful balancing act to perform, slowing the economy to lower inflation but not enough to tip us into a recession. The question is whether they have the political will to slow it down enough to really bring inflation down. Stay tuned.

Silicon Valley Wealth Advisors and its members, officers, directors, owners, shareholders, partners, employees, agents, representatives, licensors, advertisers, suppliers and service providers (collectively “SVWA") provides this Content for informational purposes only. Use of and access to the information and materials provided (the “Content") are subject to the following:

The Content is for informational purposes only, you should not construe any such information or other material as legal, tax, investment, financial, or other advice. Nothing contained herein constitutes a solicitation, recommendation, endorsement, or offer by SVWA or any third-party service provider to buy or sell any securities or other financial instruments in this or in in any other jurisdiction in which such solicitation or offer would be unlawful under the securities laws of such jurisdiction.

All Content is information of a general nature and does not address the circumstances of any particular individual or entity or their financial circumstances. Nothing in the Content constitutes professional and/or financial advice, nor does any information in the Content constitute a comprehensive or complete statement of the matters discussed or the law relating thereto. SVWA is not a fiduciary by virtue of any person’s use of or access to the Content. You alone assume the sole responsibility of evaluating the merits and risks associated with the use of the Content before making any decisions based on such information. In exchange for using the Content, you agree not to hold SVWA, its affiliates or any third-party service provider liable for any possible claim for damages arising from any decision you make based on the information.

The Content is provided “as is" and without warranties of any kind. You bear all risks associated with the use of the Content, including without limitation, any reliance on the accuracy, completeness or usefulness of any information available. SVWA disclaims all warranties, express or implied, including, without limitation, all warranties of title, non-infringement, accuracy, completeness, usefulness, merchantability, and fitness for a use, and warranties that may arise from course of dealing/performance or usage of trade.

YOUR EXCLUSIVE REMEDY FOR DISSATISFACTION WITH THE CONTENT IS TO STOP USING THE CONTENT. SVWA IS NOT LIABLE FOR ANY DIRECT, INDIRECT, INCIDENTAL, CONSEQUENTIAL, SPECIAL OR PUNITIVE DAMAGES, UNDER ANY THEORY OF LIABILITY, INCLUDING WITHOUT LIMITATION, DAMAGES FOR LOSS OF PROFITS, USE, DATA, OR LOSS OF OTHER INTANGIBLES. IN PARTICULAR, AND WITHOUT LIMITATION, SVWA WILL NOT BE LIABLE FOR DAMAGES OF ANY KIND RESULTING FROM YOUR USE OF OR INABILITY TO USE THE CONTENT.